A Bible Students Review Of The Passion Of The Christ

Hollywood superstar Mel Gibson’s 2004  movie based upon the crucifixion of Jesus Christ caused quite a stir inside of the entertainment industry, as well as the world of Christianity. Believers from all religious denominations flocked to see this film in record numbers. Non-believers have expressed concern that this movie might encourage anti-Semitism due to the violent nature of The Passion of The Christ. Mr. Gibson’s emphasis on the fact that the Jewish religious leaders of the period played such a major role in the execution of Jesus has added to the controversy.

In reviewing this movie, there are two ways of looking at it. The first is to consider what merit it has as a movie and the other its value as a biblical lesson. As a Hollywood production, the film passes with flying colors. Gibson uses an outstanding professional cast and all of the high tech gadgetry that modern day show business has to offer, to deliver an outstanding work of fiction based upon a true story! Actor James Caniezel, does an outstanding job depicting the suffering Christ. His on screen talents are evident in his ability to reach an audience with such a powerful 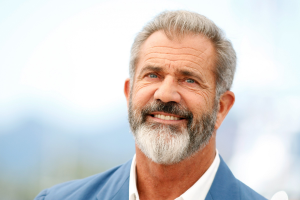 performance when speaking a language only understood through subtitles. His scenes were particularly effective when he, as Jesus, is seen flashing back to less troublesome times in his life, such as the Sermon on the Mount.

Maia Morgenstien is moving in her role as Jesus’ mother lamenting the execution of her son. One can only imagine the horror of any loving mother enduring such a nightmare. In the opinion of the writer, the best performance was that of Ivano Marsetti, in his role as Pontius Pilate, the Roman Governor, who ultimately sentenced Jesus to the cross. His reluctance to send an innocent man to his death should in no way be seen as anti-Semitic. The film makes it clear that the death of Jesus was not the fault of all Jewish people, but the fault of an envious religious hierarchy.

Where the film falls short is the gross overkill in the scenes of beating and torture. After a while one gets the feeling that they are attending a horror movie! There are not a lot of graphic details in the gospel accounts of the crucifixion, yet Gibson’s obsession with the brutality of the act borders on sadism! Renowned film critic, Roger Ebbert, said “The Passion” was “The most violent movie that I have ever seen.” This fixation on blood and guts clearly takes away from the message that the movie’s maker is attempting to advance. One wonders how much of a real impact this interpretation of Christ’s death can have on unbelievers? Can anything be gained through fear?

THE MOVIE IS INCREDIBLY UNSCRIPTURAL

The creator of The Passion of The Christ, Mel Gibson, claims to be  a devote Roman Catholic. Throughout the movie his biases towards Church dogma shines through. Gibson seems to be leaning heavily upon the Roman Catholic depiction of Christ’s death, known as “The Stations of the Cross.” Unfortunately, this is where one first runs into problems when it comes to the scriptural implications of this effort. For example, Catholic dogma advances several legends surrounding the life of Christ. Mr. Gibson employs one of them in a scene where a grieving woman named

“Veronica,” wipes Jesus’ face with a cloth as he struggles to carry the cross. As a result of this, Jesus leaves his facial impression upon the woman’s cloth. The image seems to greatly resemble the formation which appears on the Shroud of Turin! We challenge anyone to examine the scriptures and find an account of such an event. It is simply not there.

No place in scripture does it indicate that the cross carried by Jesus was bigger, or heavier, than the one carried by the others who died along side of him. Catholic tradition, as well as this movie, implies that Jesus was given an extra heavy cross that he had to drag through the streets. While this makes good theater, it should not be taken as fact. Another scene has Simon, a man chosen by Roman soldiers to help the struggling Jesus carry his cross, getting into a loud argument with the Romans over their brutality. Once again, unscriptural. While Simon, “a man of Cyrene,” (Matthew 27:32) is said to have helped the Savior carry his cross, there is nothing about such an argument in the Bible.

Another area where great liberties are taken is the presence of a Satan character played by actress, Rosalinda Celentano. The New Testament only speaks once of a direct encounter between Jesus and Satan. This occurred early in his ministry when he was tempted in the wilderness. No scripture tells us that Satan appeared to Jesus in the form of a human being. In several places in the movie, Satan appears to Jesus in the form of man. Early in the film, as Jesus prays in the Garden of Gethsemane, Satan is shown there attempting to talk Jesus out of giving his life. At one point a serpent crawls out from under Satan’s robe and Jesus promptly stomps it to death! While we believe that Satan did not want Jesus to go through with the great ransom sacrifice, it is important to note that the way it is presented here is not to be found in the Bible.

In this film, Satan makes another appearance while dealing with Jesus’ betrayer, Judas Iscariot. Shortly after he realized the full implications as to what he had done, Judas attempts to return his blood money to the Pharisees who refuse it. This is biblical, but the film carries it one step further. Judas is next seen in great anguish wailing to himself on the ground, as a group of concerned children approach him and ask if he is all right? After he urges them to go away and leave him alone, the children morph into little devils, who harass him, throw things at him, and chase him to this terrible place, possibly the entrance to Hell, where there are all of these live worms and dead animal carcasses. It is at this point that Judas hangs himself! Scripture says little about the death of Judas other than that he was so filled with shame he went out and hanged himself from a tree. (Matthew 27:5) 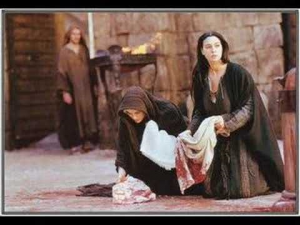 While there are several fictional events in The Passion, one of the most absurd has to be when Pilate’s wife is seen bringing towels to Mary as she watches her son being beaten to a pulp by Roman soldiers. Soon Mary is seen using the towels to wipe up Jesus’ blood! Where is that in the scriptures? As to be expected, Gibson’s work attempts to elevate the Virgin Mary to levels not found in the Bible. The Lord’s Apostles are observed in the movie calling her “Mother.” Still, far and away the most offensive scene in the movie had to be the depiction of Christ’s exchange with the two thieves crucified beside him. Throughout the crucifixion, the movie flashes back to various other events in Christ’s life. Shortly after showing Jesus telling his followers to love their enemies and to do good to those who persecute and revile them, a very hungry and vengeful crow is seen landing upon the cross of the unrepentant thief. The crow proceeds to eat at the flesh of the dying man. We challenge anyone to produce scriptures showing that this occurred!

While we concede that any movie about the life of Christ might require a bit of artistic liberty due to the brief descriptions given many of these events in the Bible, it is clear that many of the invented scenarios in this movie could cause someone with less knowledge of the Bible to go away with a warped sense of who Jesus was and why he died.

No one should question Mel Gibson’s sincerity when it comes to his faith, but it is clear that his is a gospel of fear and not an accurate testimony to the love of Jesus Christ. If you want to see good fiction this movie might be for you. If you’re looking for a serious biblical lesson, The Passion of the Christ fails miserably.