There are numerous articles on the internet claiming to “expose” Charles Taze Russell, a prominent religious leader from the 19th century. Over one hundred years after his death, Russell critics continue to advance disproven and slanderous accusations leveled against him by those opposed to his teachings related to the Bible. 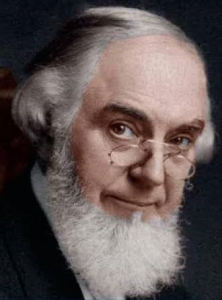 SEE THIS ARTICLE FROM THE NORTH SEATTLE BIBLE STUDENTS

The late “Doctor” Walter Martin the author of several books including the best-selling “The Kingdom of the Cults” advanced several false rumors as established facts, when it came to the character of Charles Taze Russell. For example, according to Martin, Charles Russell lied under oath in a libel suit that he brought against a minister who had printed falsehoods about him. The truth is that Pastor Russell was NEVER indicted or convicted of perjury. Russell critics are reluctant to inform their audiences that he actually WON the case in question! The claim of perjury is almost laughable to anyone who has actually read the trial transcript.

Several anti-Russell web sites even stoop so low as to claim Pastor Russell was a “child molester.” This is not only a lie, but also irresponsible to publish such claims without proof. We challenge any of Russell’s critics to produce evidence that he was ever charged or convicted of such a crime. The supposed “victim,” Rose Ball, of this crime never made such an accusation and was supportive of Pastor Russell’s work for years after his death and would have been twenty-one years old at the time of this supposed “molestation.”

Charles Taze Russell’s marriage and divorce became a favorite topic for those wishing to discredit him. Once again when the facts are held up against the allegations it is clear that the truth is not the main objective for Russell haters. There is no evidence in the court records that any of the accusations against him by his estranged wife were proven. For example, under oath Mrs. Russell took back her charge of “adultery.” In truth, Pastor Russell was ahead of his time in how he treated his wife. Mariah Russell had a prominent role in the everyday work of the early Watchtower Society. She is credited with writing articles for the publication, as well as visiting Bible Student groups around the world on behalf of her husband. In spite of the discord that occurred at the end of their marriage, Russell supported his wife financially and even made provisions for her in his will.

It has been claimed by Russell critics that he once swindled his followers by getting them to invest in “Miracle Wheat.” The truth was that “he” was swindled in this investment, which in turn caused him to give wrong information on the investment potential of the controversial wheat. He offered in writing to reimburse any fellow Bible Students that lost money on this venture. Not one of his brethren asked for their money back!

Unlike prominent religious leaders today, Charles Taze Russell lived a life of self-sacrifice. He existed on a salary of ten dollars a month. three hundred and fifty-four in today’s dollars.  As a young man he inherited a large sum of money from his parents. He placed every dime that he had into the ministry work. The Bible Students Organization never solicited money from followers and sold all materials at cost; those without means were given Watchtower publications for free. In the original “Photo Drama of Creation” Pastor Russell admonished his brethren not to take money for preaching the gospel, just as it was freely given to us, we are to freely give it to others.

Another tactic used by Russell haters to discredit him, was the fact that he had no “formal” religious training. They ridicule the fact that he is called “Pastor” Russell. Now wait a minute! Is this not the same criticism used by the Pharisees in trying to discredit Jesus and his Apostles? (Acts 3:13)

Just like with any other fallible man, Charles Taze Russell was not perfect. By his own admission he made mistakes. He freely admitted that he was wrong in his expectations for the year 1914. That said, time has shown that the year 1914 was the year that the world changed for all time. Since 1914 we have clearly been in a “Time of trouble not seen since there was a nation.” (Daniel 12:1)

NEVER CLAIMED TO BE A PROPHET

Some of Pastor Russell’s brethren in their appreciation for his works may have placed him on too high of a pedestal following his death. This was never encouraged by Pastor Russell himself. In fact, he never claimed that he was the “wise and faithful servant” of (Matthew 24:45) He maintained that this was a “class” of servants. When one examines his writings, it is clear that he took the truthful doctrines from others over the centuries and pieced them together in a harmonious way, which in turn revealed the wonderful plan of God. This is something he freely admitted. He never claimed to be a prophet, only a student of prophecy!

Charles Taze Russell was a man of humility and he always acted as a “fellow servant.” When it comes to character and integrity, his morals stand up well over the test of time. He continues to be an example on how one can live a life of sacrifice and service to the Lord.

Pastor Russell’s detractors online have even taken issue with the design of his grave in Rosemont United Cemetery, in Pittsburg, PA, claiming that it proves Russell’s association with Free Masonry. In truth, Pastor Russell’s grave is marked by a very simple headstone containing his name, his birth and death dates, and a small photo of him. Situated some twenty feet away from his 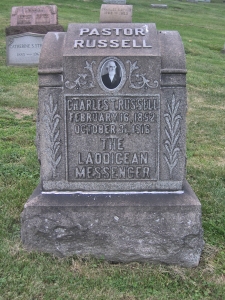 grave sits a large pyramid stone. This is NOT Pastor Russell’s headstone. It was placed in the cemetery three years following his burial by the new Watchtower overseers. The original purpose of the pyramid stone was to provide for multiple memorials of Bible Students who worked at the Watchtower and lacked the financial means to pay for their own headstones upon death. A few names can faintly be seen on the pyramid stone but the effort was abandoned after the second Watchtower President, Joseph Rutherford, dismissed early Bible Student pyramid teachings as inconsequential.

Pastor Russell did not request or have anything to do with the pyramid stone sitting near his grave in the cemetery. As proof of this, read his own will as to what Pastor Russell wanted for his funeral.

I desire to be buried in the plot of ground owned by our Society, in the Rosemont United Cemetery, and all the details of arrangements respecting the funeral service I leave in the care of my sister, Mrs. M. M. Land, and her daughters, Alice and May, or such of them as may survive me, with the assistance and advice and cooperation of the brethren, as they may request the same. Instead of an ordinary funeral discourse, I request that they arrange to have a number of the brethren, accustomed to public speaking, make a few remarks each, that the service be very simple and inexpensive and that it be conducted in the Bible House Chapel or any other place that may be considered equally appropriate or more so.

MY LEGACY OF LOVE

To the dear “Bethel” family collectively and individually I leave my best wishes, in hoping for them of the Lord His blessing, which maketh rich and addeth no sorrow. The same I extend in a still broader sweep to all the family of the Lord in every place–especially to those rejoicing in the Harvest Truth. I entreat you all that you continue to progress and to grow in grace, in knowledge, and above all in love, the great fruit of the Spirit in its various diversified forms. I exhort to meekness, not only with the world, but with one another; to patience with one another and with all men, to gentleness with all, to brotherly kindness, to godliness, to purity. I remind you that all these things are necessary for us, necessary that we may attain the promised Kingdom, and that the Apostle has assured us that if we do these things we shall never fail, but that “so an entrance shall be ministered unto us abundantly into the everlasting Kingdom of our Lord and Savior Jesus Christ.

“It is my wish that this my last Will and Testament be published in the issue of THE WATCH TOWER following my death.

My hope for myself, as for all the dear Israel of God, is that soon we shall meet to part no more, in the First Resurrection, in the Master’s presence, where there is fulness of joy forevermore. We shall be satisfied when we awake in His likeness–

“Changed from glory unto glory.”

PUBLISHED AND DECLARED IN THE PRESENCE OF THE WITNESSESWHOSE NAMES ARE ATTACHED:

Pastor Russell in his own words

When our Lord Jesus was taken before the Roman Governor, Pontius Pilate, to be judged for alleged “crimes” brought by the religious leaders of Israel, Pilate could not find any fault in him. It appears he sensed the Jewish leaders had a personal agenda in wanting him to be put to death. After hearing the Lord’s words Pilate marveled at the apparent sincerity of Jesus. In what appeared to be an honest inquiry, he asked of our Lord, “What is truth?” John 18:38. Imperfect human beings attempting to define what truth actually is has been mostly an exercise in futility.  Blinded by biases and preconceived notions, too often “truth” becomes not what actually is, but merely what fallible men desire it to be. In most cases, Satan wins through the idea “Might makes right.”

Truth is truth, that is, the actual facts. We do not pretend to compare Pastor Russell to Jesus by any means. Russell critics have every right to disagree with his biblical concepts. They have a right to their own opinion but not to their own facts. There are numerous books and other publications that misrepresent the truth about his teachings and his ethics. When holding Charles Taze Russell up to other religious leaders, the truth reveals a man of high moral character who sacrificed all of his worldly possessions in order to provide a gospel of hope for all of mankind.

May the Lord add His blessing.